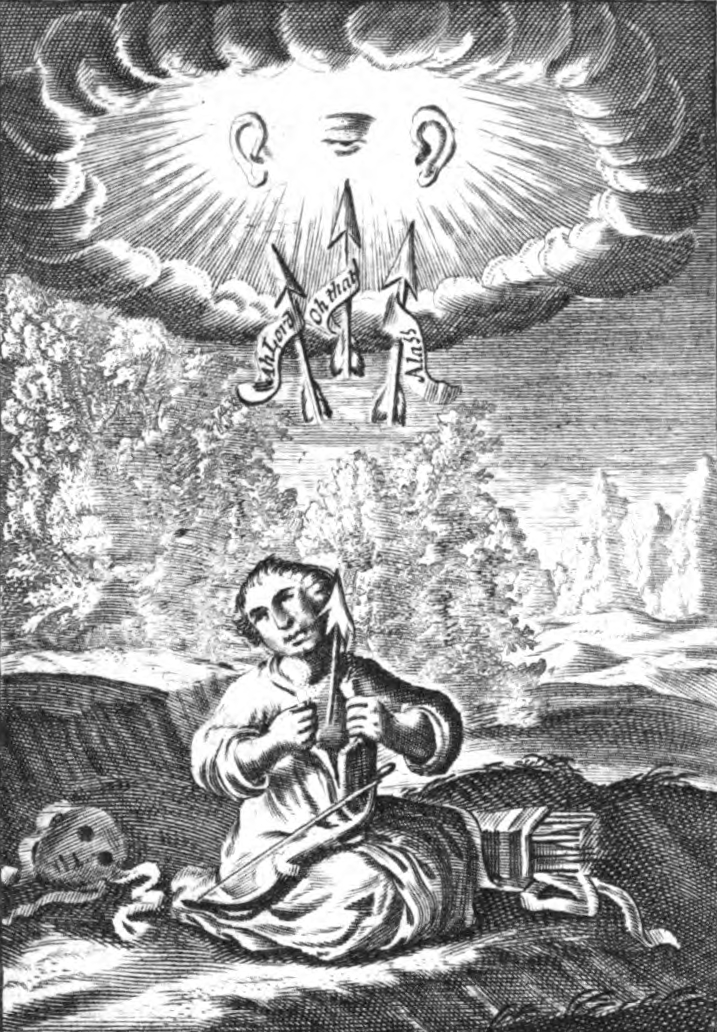 Reading the Sigh
Beyond the sphere that circles widest / passes the sigh that issues from my heart.
– Dante
The arrow of our sigh has shot beyond the revolutions of creation—Hafiz, be silent.
– Hafiz
Flowing between life and breath, suspended inside voice and word, flying the bonds of desire and the bounds of thought, pre-living the fleeting moment of death—is there anything a sigh cannot touch, nothing its arrow will not pierce? At once phenomenon and figure, the sigh is both a companion to all expression and a secret language unto itself. “And my thick sighs a mystick language prove, / Unknown to all but me and him I love” (Herman Hugo, Pia desideria). So, if the love of poetry and the poetry of love are unthinkable if not impossible without the sigh, perhaps this follows not only from the necessity of sighing to our biological and psychological life (as per recent neuroscientific research), but from a greater mystery and universal truth of sighing itself. For medieval poets and mystics, the sigh of the human heart, an “innate passion of the soul proceeding from a suspension of spirit” (Boncompagno da Signa, Rota Veneris), might traverse the cosmos and communicate with its Creator, the divine Reality whose love, as Ibn Arabi held, is “in actual fact the Sigh of God Himself epiphanized in beings and yearning to return to Himself” (Henry Corbin, Alone with the Alone). In its universality, the sigh is a form of the oneness of life and thus also the proper term and actual medium of the spiritual unity of human beings. As Meher Baba said in 1933, on Easter Sunday at a chapel in Portofino, “The sigh within the prayer is the same in the heart of the Christian, the Mohammedan, or the Jew.” Nowadays, in a narrow upside down world suspended within an always darker and vaster universe, it might seem that our sighs have nowhere to go. As Cioran wrote in A Short History of Decay, “We perceive no more of Creation than its destitution, the grim reality . . . a lonely universe before a lonely heart, each predestined to disjoin and to exasperate each other in the antithesis.” Or is such a view only a too-common cowardice, the shrinking of the heart before what Kierkegaard calls “This . . . road we all must walk—over the bridge of sighs into eternity”? Has the universe really expanded, or is it only the sigh—your sigh—which has shrunk? Either way, it is best to follow the words of Muhammad Iqbal, whose Dante-inspired masterpiece Javid Nama [Pilgrimage of Eternity] takes the path of the poet’s “peregrino spirito” [pilgrim spirit] through the spheres: I am a sigh, I will mount to the heavens!
This event features two lectures on the significance of the sigh in the works of two medieval poetic masters: Dante Alighieri (1265-1321) and Hafiz of Shiraz (1325-89). A musical performance will follow.
Intro: Nicola Masciandaro, "The Miracle of the Sigh."
Franco Masciandaro, “Dante’s Sighs/Sigh.”
Peter Booth, “Sighs in the Realm of Love’s Infinity.”
Dijwar Karaman, santoor
Peter Booth received his B.A. in English Literature from Bard College and studied Persian Language and Literature at the graduate school of Harvard University (with Anne Marie Schimmel and Wheeler Thackston). In 1977-8, on a scholarship from the Shah of Iran, he studied Persian Literature at Ferdowsi University in Mashhad. He was a resident for 32 years in Avatar Meher Baba’s Home, “Meherabad” in rural India. He is currently completing a detailed study of the poetry of Hafiz of Shiraz with numerous new translations.
Franco Masciandaro (Ph.D., Romance Languages and Literatures, Harvard University, 1971) is Professor Emeritus at the University of Connecticut and a specialist in medieval and renaissance Italian literature. He is the author of La problematica del tempo nella Commedia (Longo Editore, 1976), Dante as Dramatist:  The Myth of the Earthly Paradise and Tragic Vision in the Divine Comedy (Univ. of Pennsylvania Press, 1991), La conoscenza viva: Letture fenomenologiche da Dante a Machiavelli (Longo, 1998), and The Stranger as Friend: The Poetics of Friendship in Homer, Dante, and Boccaccio(Firenze University Press, 2013).
Reading the Sigh is organized by Nicola Masciandaro, Oyku Tekten, and the KAF Collective.

Uploaded by nicolamasciandaro on May 7, 2016